Year 2005. For the first time in 300 years the service for the dead in Orthodox tradition was officiated in the Russian extension of Klosterkirke in Horsens. The service was dedicated to the princes and princesses Alexey, Peter, Catherine and Elizabeth – relatives of the Russian Emperor Ioann VI Antonovich. 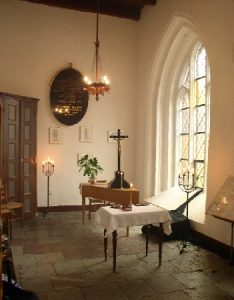 During one of the conversations with the Chief Editor of the Diocesan bulletin of St. Petersburg Diocese – Ilya Popov we learned about the little-known destiny of the secretly murdered at a young age Emperor Ioann Antonovich, whose life and life of his relatives is a sad and unfair tragedy. The Emperor’s brothers and sisters were secretly transported to a Danish city, Horsens. Princes and princesses, Alexey, Peter, Catherine and Elizabeth Antonovichi were buried in “Russian extension” of the main monastery church in Horsens. Dagmaria society, which often opens unknown pages of the Danish – Russian history, fates and events, with great enthusiasm undertook the restoration of the historic events of that period.

We started with a visit to the grave site, which appeared to be forgotten part of the church building. At the time of our visit, vacuum pumps, hoses for watering flowers, old furniture were stored in this part… 300 years of neglecting – that’s what we saw.

We received a lot of support from the priest of the Klostekirken church in Horsens. As well as from Ilia Popov and local History Museum in Horsens.

Father-superior of the Arkhangelsk diocese – Leontij helped us with prayers and also with photos of the imprisonment location in Kholmogory, Arkhangelsk region.

Ever since the first church service for the dead our society keeps caring about the graves of princes and princesses. We bought number of icons, pictures, installations to decorate the graves and also make sure that visitors can read more about Alexey, Peter, Catherine and Elizabeth. We also assure that church services in front of the graves are held periodically.