2005 – 2013. Restoration of graves at the Russian part of the “Assistens” cemetery in Copenhagen. 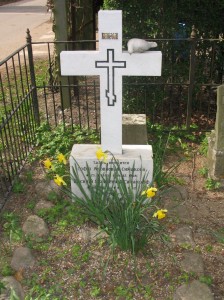 Much later we discovered the second section of the Russian part of the cemetery, the older one. It looked the same – ruined, with the exception of 3 – 4 graves of the people whose relatives took care of the graves.

Since year 2002 we began active work on changing the appearance of the Russian stations of the “Assistens”. We started research in the archives, studied cemetery books, the burial plans. We found relatives of the buried once in Denmark and submitted requests to the Russian pre-revolutionary archives.

We received great assistance from the Chief Architect of the “Assistens cemetery” – Finn Ploug, who provided us with copies of all the documents from the archives. He also provided an opportunity for cooperation with workshops for manufacturing of stone crosses and tombstones. 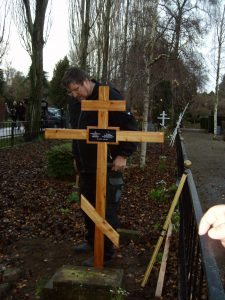 Both sections of the “Assistens” cemetery have been renovated.

In 2006, the municipality of Copenhagen has modified the appearance of the “new Russian” part of the cemetery. In 2008, the Embassy of Russia sponsored and ordered a new fence for this site.

Several crosses on the graves were renovated, old, rotten trees and bushes were uprooted. On the basis of the researches in the archives it was found that both plots belong to the parish of the Russian Orthodox church of Alexander Nevsky in Copenhagen. Copenhagen municipality handed the rights over to the owner. Thus two plots with the remains of the Russian Orthodox people were returned in the “bosom” of the Orthodox Church.