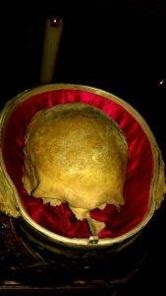 For 1000 years, Denmark has been under the cover of prayer of the Holy Martyr Pope Lucius, whose hallows head is now remains in the Catholic Church of St. Ansgar in Copenhagen.

Previously, the veneration of the saint was great in Denmark; on the day of His memory, solemn services and cross processions were held, and many people prayed for the saint’s intercession and help.

After the reformation in 1665, when all the relics were thrown out of churches, the head of the holy martyr Lucia miraculously survived, getting to the National Museum, where it was exhibited in a showcase of one of the halls.

In 1908, the head of the holy martyr Pope Lucius was transferred to the church of St. Ansgar, where it remains to this day.

Yesterday, March 16, on the eve of the Day of Remembrance of the Holy Martyr Lucius, a prayer service was held, which was served by Father Sergei (Bondarev, Moscow Patriarchate) together with the gathered, not numerous parishioners.

The priest of the Church of St. Ansgar, Father Daniel, brought from the altar an icon of St. Lucius, which was painted by a person named Alexander, who lives in the Netherlands.

After the prayer service, Father Sergei spoke warmly about Saint Lucius, how he got to Denmark, about his veneration.

Unfortunately, not many people know about the existence of such a shrine in the Scandinavian country and that the holy Martyr Lucius is the saint patron of Denmark.

Holy Martyr Pope Lucius, pray to God for us! 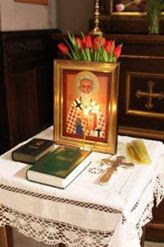 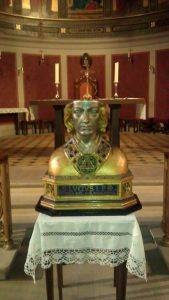 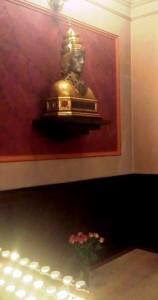