The Icon of Mother of God, the Jerusalem “Weeping”, belongs to the Russian Orthodox church of St. Alexander Nevsky in Copenhagen. In March, 1995 the Icon started to miraculously “weep”, which means that tears appeared on Mother-of-God’s eyes, which almost immediately vanished. This miracle proceeded every day during 8 months. Many came to admire the icon and to pray in front of it. There are number of testimonies of the people who have received healing from it. Many considered that exactly this icon should accompany Dagmar to Russia. At the same time, being a wonder-working this icon became simply invaluable to Christians in Denmark – they come to the church to pray in front of it.

The story of the Icon is connected with the destiny of Empress Maria Feodorovna and Her Family. On the 25th of October 1866, the day of honoring of the Jerusalem Icon of Mother-of-God, the 19 year old Danish Princess Dagmar, just married to future Russian Tsar – Alexander III, converted to Orthodoxy in Russia with new name – Maria Feodorovna. Later She became Russian Empress and the mother of the last Russian Tsar, Nikolai II.
This Icon was presented to the 81 year old widowed Empress Maria Feodorovna to comfort Her sufferings, in Her last year – 1928. At that time She reside in Denmark. The original Icon was painted by a Russian monk from Athos mountain in 1912.
All Her life the Jerusalem Mother-of-God was Her protector, and starting from 1928 the Icon has been protecting the church in Copenhagen, which was built by the Imperial Family, as well as the parishioners of the old and new immigration. Since 1995 with the miracle of “weeping” the Icon attracts also Danish citizens.
This old icon has served as the sample for the Danish artist Birte Nilsen’s icon. ” – I had an impression, that the icon paints itself – quite different feeling in comparison with all what I did earlier. I, certainly, have spent plenty of time with a brush in the hand, but I always had a feeling, that I only a tool in someone’s hands”, – tells the artist.
Birte Nilsen has painted an icon, which is now placed near the sarcophagus of Empress Maria Feodorovna in one of the most beautiful Russian cathedrals, namely – Peter and Paul cathedral, which is situated in the center of St. Petersburg.
On September the 28th, 2006 Maria Feodorovna’s remains has reunited with the remains of her husband – Tsar Alexander III.
Maria Feodorovna after long-term arrangements has been compelled to leave Russia in 1919, and has lived the rest of the life in Denmark. Until recently the sarcophagus with her remains was in the main cathedral of the Danish city Roskilde.
Dagmar dreamed to rest beside her husband Tsar Alexander III when times will change and when there will be a possibility for this. Such possibility appeared on September the 28th, 2006, 140 years after she arrived to Russia for the first time. The Danish crown prince with his wife took part in the ceremony.
How it all started. 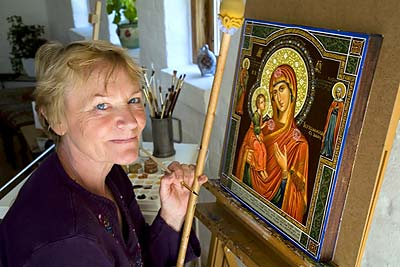 The story how Birte Nilsen has dared to paint an icon is from the category of unusual once. Birte Nilsen lives near by a small Danish town Hobro and draws whole her life. She has a diploma of a secretary, but the last 15 years she devoted herself to the art, mostly, painting and ceramic works. She was a successful artist, but at some point she felt, that there is no depth in her works, also a certain special measurement – that only icons painting gives, was missing – the feeling, that you a conductor of Gods message.
” – When I draw, – explains Birte, the process usually absorbs me, but when I work with icons, I appear in an unusual condition, in which I completely forget myself and incorporate to an icon. In fact an icon for me is a channel by means of which the spectator touches the divine world”.
In spring 2005 Birte Nilsen took part in an exhibition of icons in the church of Holy Spirit in Copenhagen together with other Danish painters and artists from other countries. Using the opportunity that she was in Copenhagen, Birte visited the Russian church, which has several magnificent icons.
During this visit she got acquainted with Irina Demidova (the chairman of our society), who showed her the wonder-working icon with traces of tears. The icon made lasting impression on Birte. Irina asked, whether Birte wishes to make a similar icon. The new icon should become a gift for Dagmar reburial from Danish and Russian people, from Russian church and Cultural society “Dagmaria”. Birte has agreed.
Later on during a trip to Ivanovo (Russia) she met a priest who has written a book about this icon. He blessed her on painting of the icon. Birte lived by a couple of artists from Suzdal. New friends suggested her to buy a house and stay in the city, but, unfortunately, Birte could not leave her Danish family.
– “The trip to Russia was a great adventure, – recalls Birte. – it is a great honor that I was chosen for this icon painting. Before I started to paint, I hung up a photo of the original icon and went about it several days and listened to myself: ” Can I make a similar icon? ” Finally, I have come to a conclusion, that if there is divine will for this everything will turn out well.
I enjoyed work process every day. I was ready to that in August a priest in the Russian orthodox church should bless the ready icon and leave it in the altar for 40 days before letting it to accompany Dagmar along her last way. But when it really occurred, I could not hold tears “.
Birte Nilsen was in St. Petersburg during reburial ceremony. Here she had an opportunity to say goodbye to the icon, which, let’s hope for it, will stay by the sarcophagus till the end of the days