Born 9 May 1871 in Tsarskoe Selo, Grand Duke George Alexandrovich was the third son… of Emperor Alexander III and Empress Marie Feodorovna. He died suddenly, on 9 August 1899 in Abastuman, Georgia, at the age of 28. George was so named after his mother’s older brother, King George I of Greece. He was a typical Romanov – tall, handsome and full of fun. He was always getting into mischief and, because his mother had a great weakness for him, getting away with it.
George was considered to be the cleverest of the Imperial children. He was also outgoing, like his mother. George and Nicholas shared the same tutors, but studied in adjoining rooms.

George displayed signs of a promising career in the Navy before falling ill with tuberculosis in 1890. The Emperor and Empress decided to send Nicholas and George on a nine-month-long trip to Japan in 1890. George would go as a naval cadet and Nicholas to complete his education by seeing some of the world. Their mother hoped the warm sun and the sea air would improve George’s health. 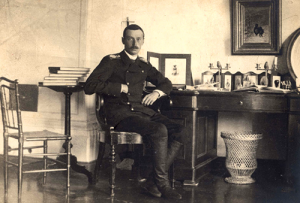 In India, Nicholas telegraphed home that his brother George had to remain on ship because he had trouble with his leg. Although George assured his parents that he was perfectly well, they were suddenly informed he had a fever and would have to return home.

In November 1894, Emperor Alexander III died and Nicholas mounted the throne as Emperor. At the time, Nicholas had no children, thus according to the laws of succession of the Russian Empire, Grand Duke George became Tsarevich.
George’s ill-health had forced him to relocate to Abastuman in Georgia. It was impossible for him to return to St. Petersburg for the funeral of his father, Alexander III.
Nicholas wrote to his brother, “… constantly pray to God to send you a full and speedy recovery, and to comfort you, because it is so much more difficult to be alone after such great sorrow than it is for us who are at least together!”
In June 1899, George wrote to his brother, “I am terribly sad that I have not yet been able to see your daughters and get to know them; but what can I do! It means it’s not my fate, and everything is the will of God.”
George died suddenly, on 9 August 1899, at the age of 28. He had been out alone on his motorcycle. A peasant woman had discovered him collapsed at the side of the road, blood oozing from his mouth as he struggled to breathe.
On 14 August 1899, he was laid to rest in the St. Peter and Paul Cathedral in St. Petersburg, not far from his late father, Alexander III.