Log In
4
SHARES
FacebookTwitterGooglePinterest
RedditTumblr
Based on the reminiscences of T.N. Kulikovsky, the grandson of empress Marie Feodorovna 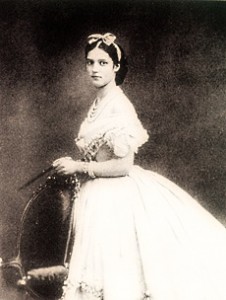 Oh yea, back then in times of yore
The people were far greater here…
The would-be Russian Empress Marie (also spelled Maria) Feodorovna was born in 1847 in Denmark. At birth she was named Princess Dagmar and was the fourth child of the Prince of Glucksburg, who would later become the King of Denmark Christian IX. The latter ascended the throne in 1863 upon the death of the childless King Frederik VII, – the last of the Danish Oldenburgs – the dynasty who had reigned Denmark for over 400 years (from 1448 till 1863).
Dagmar’s elder sister Alexandra was married to the King of England Edward VII; her brother Wilhelm married Grand Duchess Olga Konstantinovna and later, adopting the name George I, became the King of the Hellenes and subsequently the forebear of the current royal Greek dynasty. The youngest sister Thyra married Ernest-Augustus, the Duke of Cumberland. King Christian IX used to call his daughters all kinds of endearing names, so that Alexandra was “my most beautiful daughter”, Dagmar was “my cleverest daughter” and Thyra – “my kindest daughter”. Their youngest brother – Prince Waldemar, who died in 1939 was the grandfather of Anna, the Queen of Romania (ne’e Bourbon-Parma).
Dagmar’s childhood fell on rather turbulent times. Back then Denmark was quite an impoverished country: in the course of the Napoleonic wars it had lost the territory of Norway and along with it the whole Danish navy of global importance. The mutiny in the Holstein region (which at the time belonged to Denmark) was backed up by Prussia, Saxony and other states within the Germanic Confederation, resulting in the Three Year War (1848 -1850). Dagmar’s father, Prince Christian of Denmark participated in that war as a commander of horse guards.
14  years later,  in 1864 he was enthroned;  Queen Victoria of England and the Russian Tsar recognized
Christian IX’s rights to the whole territory of the Danish Kingdom. Despite that fact Prussia and Austria-Hungary, guided by the unbending will of Chancellor Bismarck, attacked Denmark with all their military might, vindicating this assail with the allegations of “protecting the rights” of the southern duchies Schleswig and Holstein.
At the commencement of the war Denmark achieved a stunning victory by the Island of Helgoland. Admiral Suenson burned down Schwarzenberg – a beauty of a ship and the pride of the Austrian fleet. The battle resulted in driving dozens of ships of the allied forces into the neutral waters, whereat those ships were interned.
The joint Prussian-Austrian-Hungarian offensive inland had been initially impeded at the ground flank Dubbol, but with its downfall the enemy managed to take over the whole of Jutland. At that point the war, whilst dragging on for about half a year more, was practically lost.
The peace treaty signed in Vein bereft Denmark of the duchies Schleswig and Holstein.
Russia tolerated the defeat of Denmark partly due to the fact that only ten years before, – in the course of the Crimean War, – Denmark had allowed the British fleet enter the Baltic Sea. Nevertheless, right after Denmark’s defeat Russia considered it desirable to uphold and validate the new Danish dynasty through marrying the young Princess Dagmar of Denmark to the Russian Tsesarevich – the eldest son of the Tsar Liberator (so called for freeing Russian praedial serfs, and later liberating the Balkans). Unfortunately Tsesarevich was struck with consumption – back then an incurable disease. On his deathbed Tsesarevich joined the hands of his bride and his brother – the future Emperor Alexander III, expressing a wish that he would marry the young Danish princess. The wedding took place on November 9, 1866. 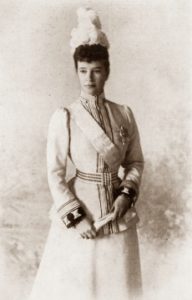 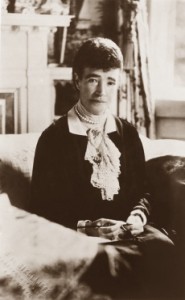 In winters she lived in the Amalienborg Palace in Copenhagen, which consisted of several 3-4 storey Baroque buildings scattered over a large area. She was allotted the building previously occupied by her father – Christian IX. The residence of King Christian X, her nephew, was located directly opposite her building. To the right of her house dwelled Dowager Queen Louise, and the building to the left was used for official reception ceremonies.
When the King was in his residence, the changing of the guards ceremony would usually take place at noon – with music, trooping the color, etc. Some officers would oftentimes sneak a peek from under the visors of their bear-fur hats at the windows of the Russian Dowager Empress: and if she was standing by the window, they would gleefully – although unofficially – salute her with their sabers. The King did not approve of that behavior and would often rudely rebuke them. But the officers went on with their signs of reverence, for the Dowager Empress was extremely popular among the Danes.
She would spend her summers by the seaside, 12 kilometers north of Copenhagen, in the large Hvidore villa, with a splendid garden and its own beach. Hvidore had been purchased earlier by the untimely widowed sisters, – The Russian Empress and the Queen of England, – as a “half-way” meeting place, in the land of their father.
Maria Feodorovna did not go to Copenhagen during the winter of 1927-1928, as the doctors regarded the Dowager Empress to be too weak to travel. Hvidore, not suited for winter accommodations, was being warmed by oil heaters. Half a year later she died upon an autumn evening.
And almost immediately upon that sad event a Danish guardsman in full dress uniform appeared on the doorstep with an enormous wreath as a tribute from the regiment whose patron had once been Emperor Alexander III.
A number of distinguished high-ranking officials attended the funeral:
The nephew of the Dowager Empress, King Haakon of Norway, the Belgian King Albert with his heir Prince Leopold, the future kings of Britain brothers Edward VIII and George VI, and hosts of others.
Marie Feodorovna was buried in the Roskilde cathedral – a place of royal crowning ceremonies and the location of the royal family vaults. The Empress’ coffin was put at rest under the burial vault of her parents.
Several icons and lampads hung on the wall near the shrine of the Dowager Empress.
In 2006 the remains of the Dowager Empress were interred in the Peter and Paul Cathedral in St. Petersburg.
She was not canonized as a saint. But the luminous footprints she’d left on this Earth keep helping people whom she loved, those for whom she would surely care if she were alive.
We believe that the Lord rests her soul – for it took its share of suffering during her earthly life. Let us preserve an eternal memory and gratefulness to Empress Marie Feodorovna!
Amen.
Translation by Tony Gao